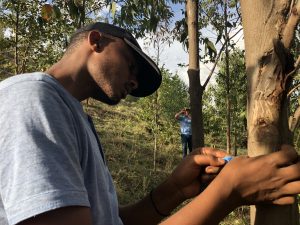 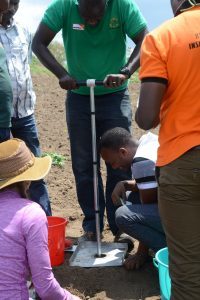 The training was held in Nyagatare District to equip project members with surveillance and analytic tools on land-degradation dynamics, including social and economic dimensions, that support strategic decision-making and monitoring of the expansion of scale of evergreen agriculture.

The training included how to carry out navigation on randomized plots using global positional systems, data entry using Open Data Kit as well as back-up paper forms, data upload using the Kit, all aspects of the Framework field survey including soil sampling, tree and shrub biodiversity measurements, erosion and infiltration measurements, interpretation of data and preliminary analysis, and putting the training into action.

The Framework methodology, developed by World Agroforestry, is one of the largest land-health databases in the world, providing a field protocol for measuring indicators of the ‘health’ of an ecosystem, including vegetation cover, structure and floristic composition, historic land use, land degradation, soil characteristics, including soil organic carbon stocks for assessing mitigation potential and infiltration capacity, as well as providing a monitoring framework to detect changes over time.

‘The Regreening Africa project will benefit from existing data in the database while contributing to these critically important global datasets through data collection,’ said Winowiecki.

Further, Earth Observation data will be combined with the Framework to develop outputs for Regreening Africa, such as assessments of land-cover changes, land use, land degradation, and soil health. These outputs will form part of stakeholder engagement processes through interactive tools and maps that will allow users to explore complex interactions between land management, regreening efforts and land health.

Two Framework sites are co-located with Regreening Africa in Nyagatare and Kayonza districts.

Providence Mujawamariya of World Agroforestry, in collaboration with the Rwanda Agriculture and Animal Resources Development Board, undertook a field survey in Nyagatare and Kayonza in October and November 2018, respectively. 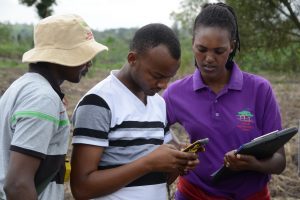 One hundred and fifty-five plots were sampled in Nyagatare and 157 in Kayonza. The results showed that 96 and 79 percent of the sampled plots in Nyagatare and in Kayonza, respectively, were cultivated. In Kayonza, land ownership was predominately private (90 percent), followed by government (6 percent) and then communal (2 percent). In Nyagatare, however, 97 percent of the plots were privately owned, followed by 3 percent owned by government. 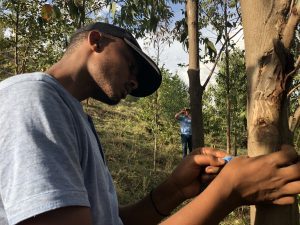 A participant measuring the DBH (Diameter at Breast Height) of a tree. Photo: Leigh Winowiecki

An assessment of tree species was also carried out, finding 62 unique tree species, with exotic species, including fruit trees and timber trees as the most common: Eucalyptusspp, Grevillea robusta, Euphorbia tirucalli, Ricinus communis, Magnifera indica, Carica papaya andSenna spectabillis. Again, the two sites varied in that Jatropha curcaswas only found in Kayonza and Senna singueanawas only found in Nyagatare.

The data demonstrate that higher species’ diversity was found on farms (n=32 unique species in cultivated plots) compared to non-cultivated plots, mostly owing to the planting of fruit and timber species. This indicates that agroforestry practices are successfully being carried out and that the target of restoring 100,000 hectares of degraded land can be achieved. 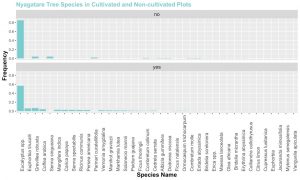 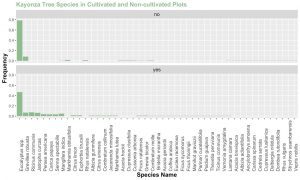 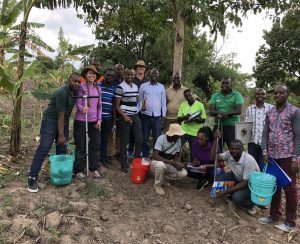 In terms of soil health, erosion prevalence was on average higher in Kayonza (45%) compared to Nyagatare (27%). For soil-water conservation measures, Nyagatare had a higher presence compared to Kayonza.

Participants were also shown how to measure the infiltration capacity of soils, which is a key variable controlling soil and groundwater recharge, and generation of surface runoff and flooding. The data gathered from this experiment will be used to model saturated hydraulic conductivity and to understand how land use and land management influence the infiltration capacity of soils.

The facilitators indicated that there will be further analysis of the data, including the status of land degradation, and mapping and modelling of the infiltration data. Additionally, soil samples will be analysed to determine key properties, such as soil organic carbon, total nitrogen, soil pH, base cations, and texture. They also stated that maps of key indicators of land and soil health will be generated, including soil erosion prevalence, and soil organic carbon.

Regreening Africa is an ambitious five-year project that seeks to reverse land degradation among 500,000 households, and across one million hectares in eight countries in sub-Saharan Africa. By incorporating trees into croplands, communal lands and pastoral areas, regreening efforts make it possible to reclaim Africa’s degraded landscapes.