Regreening activities kick off in Somalia! 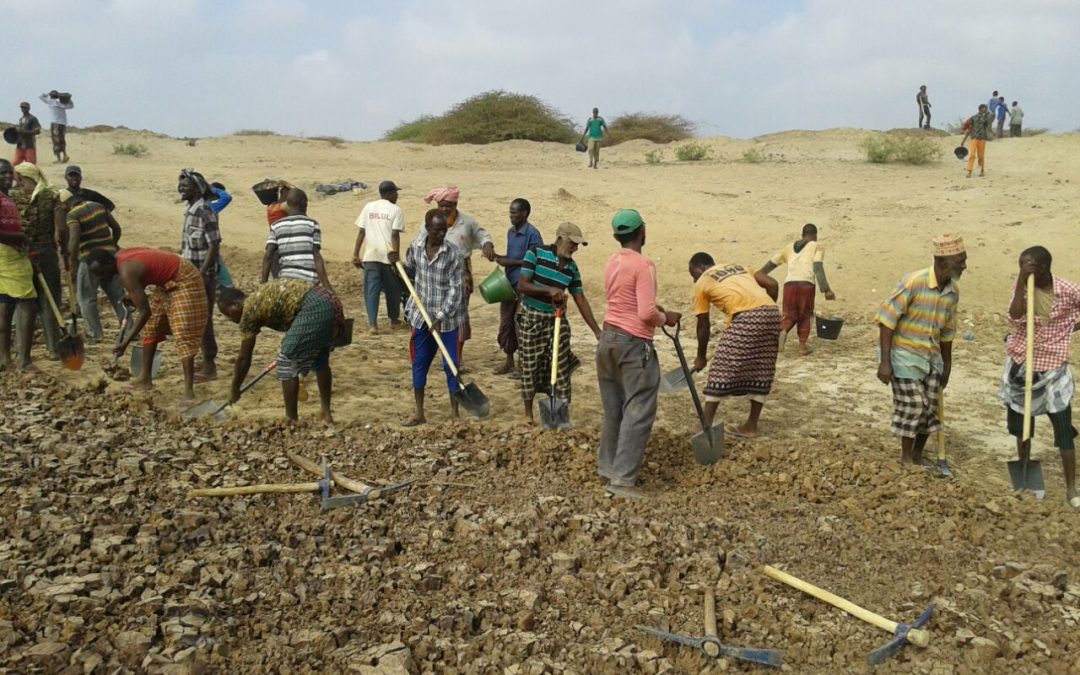 Participants at the Regreening Africa inception meeting for Somalia. Photo: May Muthuri

Thousands of farmers are set to benefit from land restoration in the drought- and strife-stricken country.

Somalia is at a turning point towards progressive development after two decades of strife and instability. A track record of reforms is being consolidated, paving the way for future debt relief and access to concessional financing. The European Union is a leading player in turning the tide in Somalia through various investment programmes that include restoration of degraded land through regreening initiatives, such as Regreening Africa, led by World Agroforestry (ICRAF).

Speaking during the Somalia inception meeting for Regreening Africa held at the headquarters of ICRAF in Nairobi, Kenya, 16–17 April 2019, Susan Chomba, the Regreening Africa manager, stated that in Somalia they aimed to regreen 50,000 hectares over a span of five years (2017–2022), working with approximately 20,000 households.

World Agroforestry is committed to reverse land degradation in Somalia through regreening, diversifying livelihoods, and developing value chains. Addressing representatives of the Government of Somalia at the meeting, ICRAF’s Deputy Director-General Research Ravi Prabhu said that it was a privilege to work in Somalia and that ICRAF was aware of the challenges and risks involved but remained committed to honour the European Union’s faith and meet the project’s ambitions through partnerships with the Government and other organizations working in the country.

Echoing Prabhu’s sentiments, Pauline Gibourdel, programme manager for Resilience at the European Commission and delegation in Somalia, emphasized the EU’s interest in the country and communicated the success of the Natural Resource project funded by the EU in Puntland. She noted that such successes improved relations and created the potential to attract additional support. Welcoming the Regreening Africa initiative in Somalia, Director General of the Directorate of Environment, Office of the Prime Minister, Hon. Ahmed Yusuf Ahmed expressed the Government’s support through supervision and monitoring to ensure successful delivery of the objectives. To demonstrate its support to regreening efforts, he noted that the Government of Somalia’s nursery in Hargeisa had provided 45,000 seedlings of different species to be planted during the Somaliland National Tree Planting Day, 15 April 2019.

Appreciating the role of women in regreening efforts, gender-sensitive, tree-based value chains will be developed to empower women economically and increase their voice in natural-resource management systems. Women will also be trained in various regreening initiatives through village savings groups. To ensure inclusivity, project partner, CARE Somalia, envisions the involvement of women in the propagation of the frankincense tree that has always had masculine associations, being inherited from the male side of the family. World Vision Somalia promises that at least 30 percent of beneficiaries will be women. Nonetheless, the meeting urged the implementing partners to increase the number of women engaging in activities.

World Vision Somalia and CARE are working together in Somaliland and Puntland. The successes from the two states will be expanded to other states. To ensure sustainability, the Stakeholder Approach to Risk Informed and Evidence Based Decision Making (SHARED) approach will address the underlying root causes of the environmental, social, institutional and policy bottlenecks to ensure regreening activities directly benefit the livelihoods of community members.

To meet the ambitious targets to reverse land degradation in Somalia, the meeting agreed that a supervisory committee will be constituted from the Federal Government, Puntland and Somaliland to review progress and provide feedback; a streamlined baseline assessment will be conducted and uptake surveys will implemented for continuous monitoring; ICRAF will provide technical support to the partners in Somaliland and Puntland; a gender focus will be factored in during implementation; specific data on nurseries, farmer-managed natural regeneration and tree planting will be collected to compliment the monitoring efforts; and collaboration with other partners working in the areas, such as the Food and Agriculture Organization of the United Nations’ Somalia Water and Land Information Management project and the Economics of Land Degradation initiative, will take place throughout the life of the project.