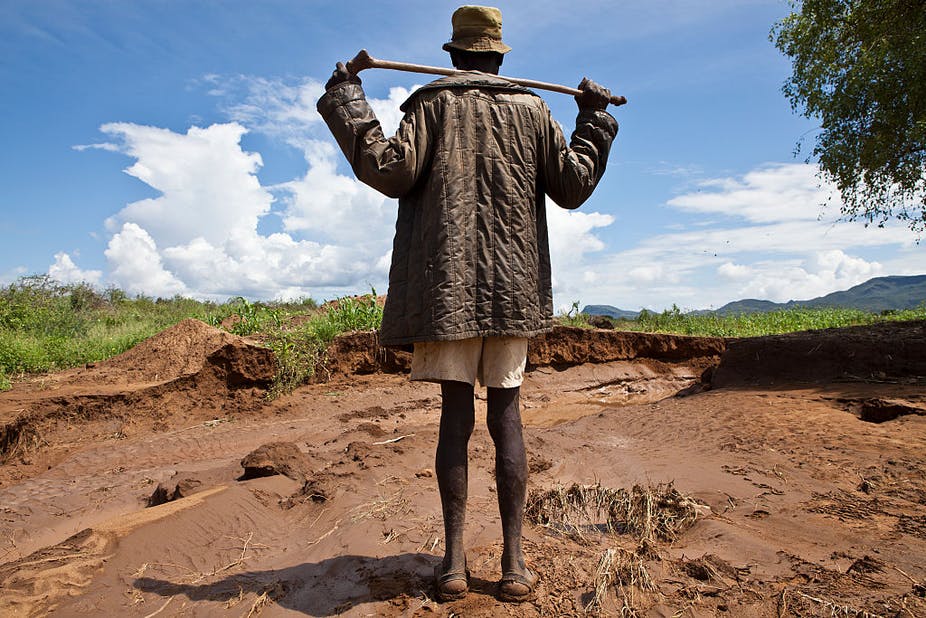 Land is essential to our lives – we grow food on it and rely on it for economic growth and development. In sub-Saharan Africa approximately 83% of people depend directly on land for survival.

However, approximately two-thirds of the continent’s productive land is degraded – it has lost its productive capacity – to some degree. This is driven by years of overgrazing, inappropriate agricultural practices, extreme weather events and the conversion of forest land into farm land. The future doesn’t look promising either as Africa is the only continent where deforestation and forest conversion to agricultural land is on the rise.

Reversing and preventing land degradation is critical if we want ecosystems to keep working; for instance, providing food, fresh water and regulating the climate, natural disasters, and pests.

Fortunately, there is considerable global commitment to reverse and halt further land degradation. The Bonn Challenge, for instance, is a global effort to restore 350 million hectares of degraded land by 2030. There are also several important regional initiatives, such as the Africa Forest Landscape Restoration Initiative (AFR100), which aims to restore 100 million hectares by 2030.

Regreening Africa is another effort that my colleagues and I have been working on. Funded by the European Union and led by World Agroforestry together with five non-govermental organisations (NGOs), the programme works directly with 500,000 households to restore one million hectares of agricultural land. The programme is happening in Ethiopia, Ghana, Kenya, Mali, Niger, Rwanda, Senegal and Somalia.

In 2018, we carried out a baseline survey in seven of the eight participating countries, which has just been published.

We found high levels of land degradation in programme sites across all seven countries. We also found that farm incomes were generally low, though trees were present on most farms and most farmers had already engaged in re-greening activities.

These findings will allow us to assess how the Regreening Africa programme will affect people and the environment and generate evidence on how land restoration efforts can be scaled up, a key aim of this initiative.

Regreening Africa works by supporting farming households to plant appropriate tree species on their farms and facilitate their natural regeneration. Farmers are linked to tree product value chains as an incentive.

Our data collection focused on levels of exposure to agroforestry training, the uptake of regreening practices, indicators of land degradation – such as soil erosion, soil organic carbon, and vegetative cover – and farm income.

Using satellite imagery and scientific models, we detected high levels of land degradation. Soil erosion prevalence – a key indicator of land degradation – was found to be high in all seven countries, but highest in Niger, where over 75% of the fields were found to be highly degraded. The highest variation of soil erosion was found in Kenya, where approximately half of fields were both above and below 50% erosion prevalence.

Across the seven countries, 94% of households reported the presence of at least one tree on their farm or homestead. The estimated average number per hectare was 150.

We are also tracking the ratio of native to exotic species to ensure the ecosystem balance isn’t being undermined. In general, households tended to have more native trees species on their farms compared with exotic species. This trend applied to all countries, save for Rwanda.

What was encouraging is that over half of survey households (59%) undertook action to scale up trees on their farms in the year prior to being interviewed. This action varied across and within the seven countries.

The survey also captured data on exposure to regreening-related training in the 12 months before they were surveyed. This was found to be low at 15% overall (11% women and 18% men), but with statistically significant variation across countries.

One of Regreening Africa’s central hypotheses is that farmers are more likely to invest in land restoration, including tree establishment, if they can clearly see the potential financial benefits from doing so. This is expected to be through, for instance, the future promise of selling tree-related products, such as fruits, timber and honey, or through boosting crop productivity, resulting from the restoration of degraded soils.

Consequently, the baseline survey captured data on baseline levels of both total farm income and income specific to tree products. Because trees take time to establish, such income streams were modelled over 10 year time horizons.

The without-project (“business as usual”) projections for total farm income (income from both crops and tree products) were found to be generally low but with considerable variation across countries and households. For example, average Year 1 per capita projections ranged from US$690 for Niger to US$3,150 for Mali.

The 10-year per capita projected returns for tree products was found to be highest for Rwanda at US$4,858 on average, followed by Kenya (US$1,625 on average) and Mali (US$1,448 on average). Indeed, Rwanda was the only country where tree products made up a significant share of projected farm returns, given high levels of historical investment in fruit tree production. There is therefore significant room to bolster the economic contribution of trees in the farming systems Regreening Africa is targeting.

An overarching conclusion following the baseline survey is that there is huge variation both across and within the seven countries. No one size fits all. Regreening Africa must therefore ensure that restoration practices are carefully tailored to the local context. It’s also important to meet the goals of restoration and income generation simultaneously.

Regreening Africa is now at about the halfway mark of activity implementation. Much progress has been made, with field teams adjusting their operations to the new COVID-19 reality. The programme’s final survey will (hopefully) take place in a post-pandemic world and with strong evidence that it is possible to produce the food people need without undermining the health of the land.

This article is republished from The Conversation Africa under a Creative Commons license. Read the original article.