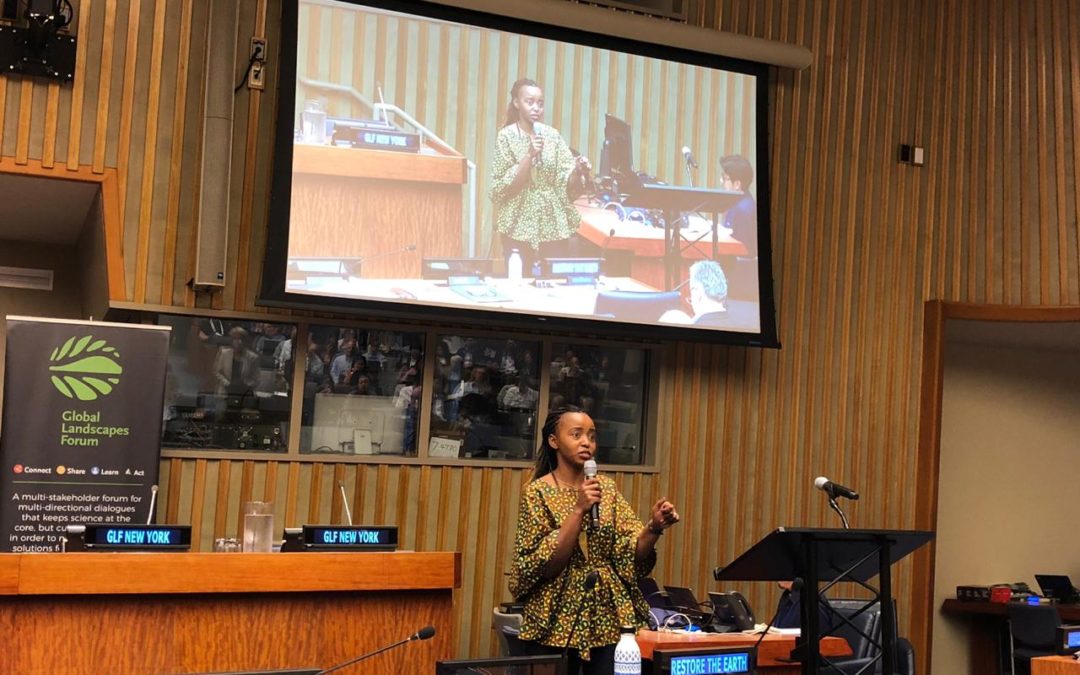 The potential for eco-restoration in Africa is immense and notably so. Around two-thirds of the continent remains degraded with 700 million hectares of land in urgent need of restoration. Dr. Susan Chomba holds a Ph.D. in Forest Governance, and works as a social scientist at the International Centre for Research in Agroforestry (ICRAF) headquartered in Nairobi. She currently leads ICRAF’s Regreening Africa: a five-year project (2017-2022) that targets 500,000 households in Africa and aims to restore one million hectares of land.

Population is on the rise, with UN estimates predicting a worldwide population of 8.5 billion by 2030. This growth is a challenge, given constraints on resources and production, as well as increasing pressure to clear forests to create agricultural land. But it is not a universal one, Dr. Chomba says. Some case studies, “including a famous case study of the Machakos Landscape in Kenya,” show that “you can have greener landscapes with an increasing population.” In cases like this, the population increase, whether due to migration or growth of an existing population, had in fact reversed the condition of degraded land. “When people are conscious and aware that their livelihoods are dependent on the land, they are very likely to invest in soil and water conservation, and in tree-planting.” The indiscriminate clearing of land occurs when these linkages between livelihoods and the land are not apparent.

Dr. Chomba acknowledges the complexity of population growth, but cautions against focusing too narrowly on the issue in the context of restoring landscapes. The subject of “household size” can be a sensitive one when, traditionally, cultures have favored large families as a source of labor and prestige.

But this situation can change with education. Studies show that women who go on to secondary education make better decisions on family planning. Dr. Chomba notes that when societies ensure women access to family planning information and measures, they have less need to dictate how many children a woman should have. Education connects to food security as well. Women with more education know more about nutrition, which helps them plan and provide healthy and nutritious meals for their families.

The Importance of Understanding Communities

Around the world people are beginning to understand the importance of harnessing local indigenous knowledge to address food and water insecurity. In Africa, development projects are working to integrate local knowledge with scientific advances.

“The local people have been living and interacting with these environments for many, many years. So our assumption that we can bring entirely new knowledge into their systems is fundamentally wrong. We need to understand how they have evolved with these systems and within these structures, and then combine this with scientific knowledge.” This combination of knowledge would improve current food production processes, and also keep these systems sustainable over the long term.

Also crucial are incentives for local communities to restore land. Traditionally, native species such as ziziphus (jujube) and baobabs have taken 30 to 50 years to produce fruit. But  vegetative propagation practices like grafting (transplanting living tissue of one plant onto another) help many tree species reach maturity far more quickly. Over time, people have grafted trees like mango, avocado and meringa and they now produce fruits much earlier. This boost in productivity gives farmers the incentive to plant and nurture these trees and become involved in restoring the landscape.

The Current Challenges in Africa

But when it comes to land restoration, there are no magic bullets, as Dr. Chomba reveals. Implementing such projects takes time, and it can be challenging to engage local community members. The challenge is particularly evident in poorer areas, where farmers habitually cut down trees and burn charcoal so they can provide food for their families and send their children to school.

“It takes a lot of work because talking is not enough, you need to be able to provide tangible alternatives to [farmers]. Engaging with these communities to change mindsets, discuss alternative sources of livelihoods, and actually implement them takes time.”

A third challenge that Dr. Chomba highlights involves gender: women’s involvement in restoration, and the social and cultural norms around it. In many African communities traditional rules dictate that women cannot have ownership over land. Such rules provide women with little incentive to restore land.  Project teams also tend to be male-dominated. This further dissuades women, who traditionally take care of household and farm work, from joining.

Project teams also tend to be male-dominated. This further dissuades women, who traditionally take care of household and farm work, from joining.

Despite these challenges, Dr. Chomba sees “good traction” on the ground. A major approach to involving communities is engaging with government agencies and the relevant ministries in order to reverse the limiting policies and thus allow for large-scale land restoration. It will take a long time, as Dr. Chomba remarks, but there is no denying that the restoration movement in Africa has already taken root. In Niger, five million hectares of land have been restored through farmer-managed restoration.

“There will be more.”