Carica papaya: a tree that keeps on giving 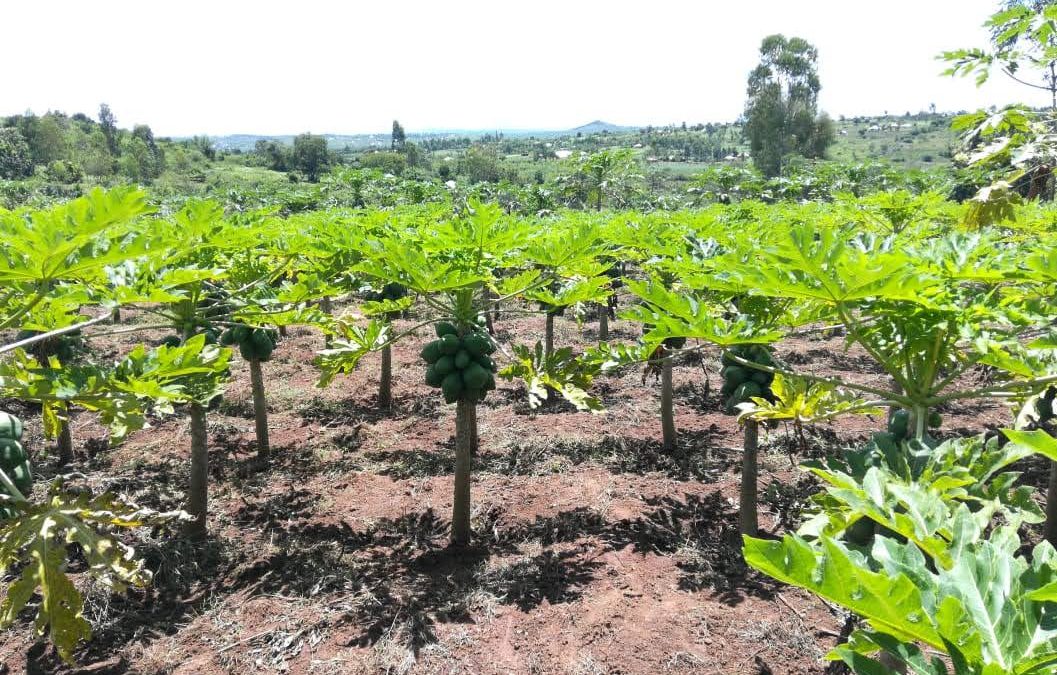 By May Muthuri, Stephanie Ojee, Brian Wambua and Patrick Worms

Farmers in Kenya are benefitting from growing pawpaw thanks to support from Regreening Africa.

For centuries, ‘pawpaw’ (Carica papaya), a rich source of vitamins, minerals and other nutrients, has formed part of the staple diet for families across Kenya. It’s one of the first fruits kids get introduced to as they are weaned.

But for some farmers, pawpaw was not attractive enough to plant. Charles Odero, a lead farmer in Migori County, in Kenya’s southwest, never imagined pawpaw to be a fast maturing fruit of high economic and nutritional value. “If I had to choose between cultivating pawpaw, mangoes or bananas on my 1 hectare farm, I would have picked bananas because they are reputed to bring the most income,” he said, standing in his orchard of 500 papaya trees! So, what changed?

“In 2018, staff from World Vision working with the Regreening Africa project suggested I add fruit trees on my farm to boost my income and crop productivity,” Odero, a straight-backed man with a frank gaze, explained. “At the time, I was just growing maize, beans and cassava. Even though I was generally faring well, I could see I would soon need more money. My four children were approaching high school and upper primary, which meant increased school fees.” Odero could see the logic of adding the trees but was faced with a conundrum: use his savings to pay school fees or to invest in an orchard? 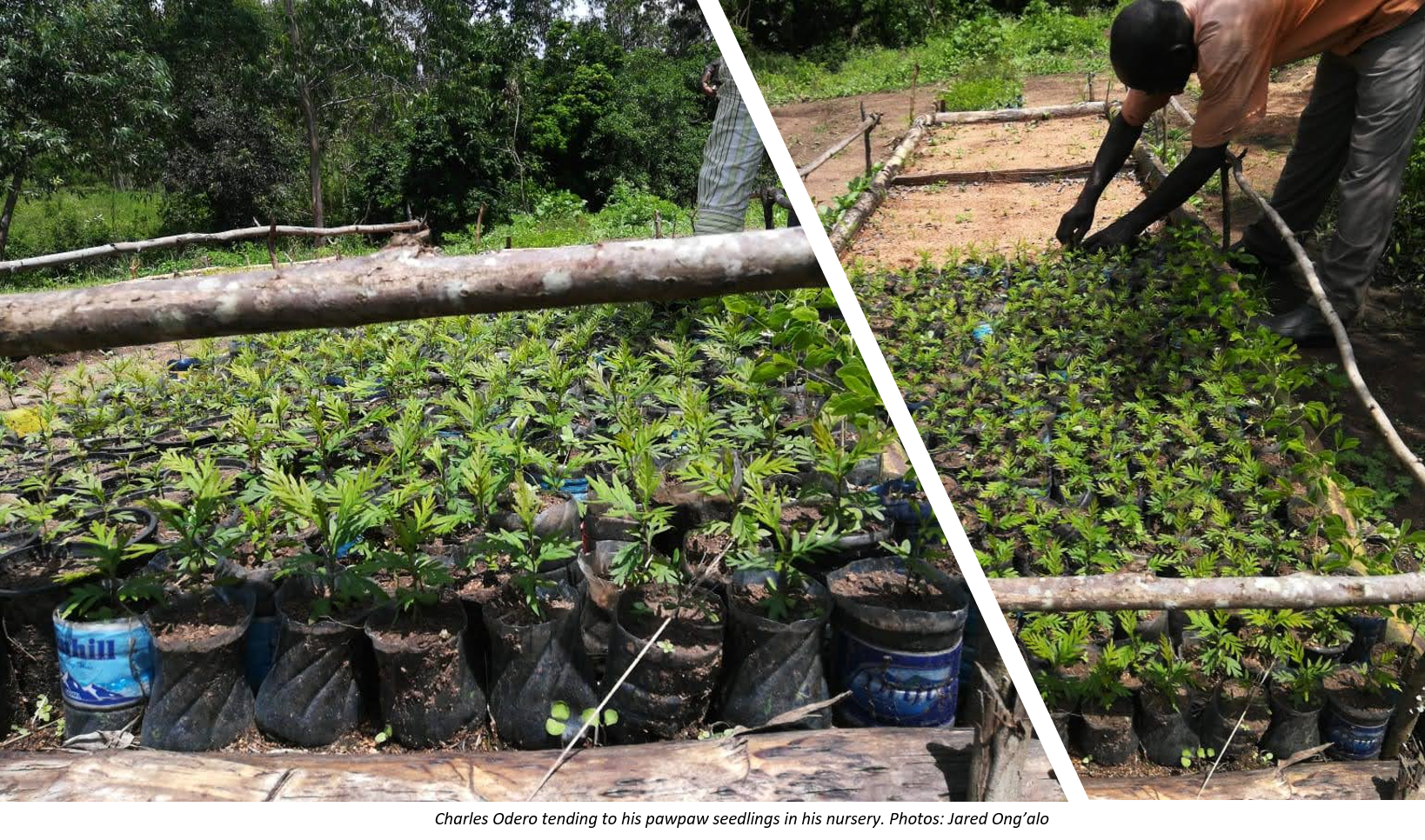 Regreening Africa is a European Union-funded project active across eight countries. in Migori County alone, it hopes to restore 10,500 hectares of degraded lands and help 5300 households. “Regreening Africa has been keen to promote the systematic and deliberate integration of trees on farms,” said Charles Odhiambo, from World Vision and also the Regreening Africa project manager in Kenya. “In Nyatike, Migori county, the majority rely on artisanal gold mining. Farm sizes are continuously decreasing due to increasing population,” he added. An overreliance on annual cropping has exacerbated erosion and other forms of land degradation. In that environment, fruit trees can offer multiple wins, providing viable alternative livelihoods, boosting resilience and reversing land degradation.

The project runs training courses whose content was designed to help farmers reverse degradation on their lands, boost their economic prospects, improve their resilience to the worsening bouts of extreme weather brought by the climate crisis, and help them set up and profitably manage tree nurseries.

Farmers were particularly interested in learning how to graft fruit-tree seedlings, how to optimise their tree-planting in various niches on their farms, and how to add value to fruit-tree products. “Most importantly, the short growth span of grafted trees is what drew my attention and that of other farmers in my area,” noted Odero. “The high yields and good returns made the practice attractive. The trainings really helped improve my capacity as a farmer,” said Odero. 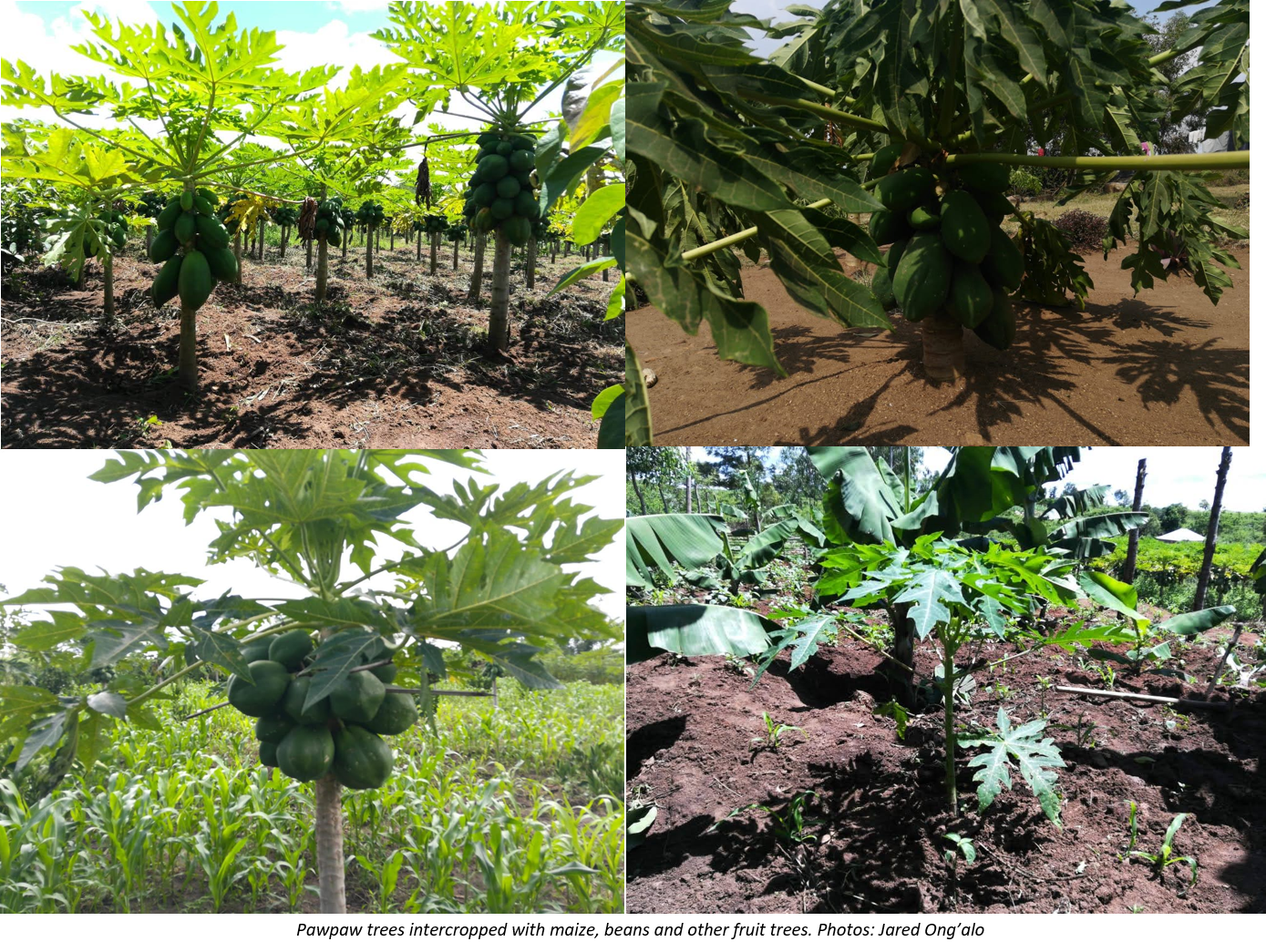 Migori traditionally relied on community forests. Today, it is afflicted by increasing rates of land degradation. Its farms suffer from low productivity and low tree cover. The focus on staple crops has not helped reduce high levels of food and nutrition insecurity. And the number and intensity of floods and droughts seem to be growing year after year.

Clearly, something needed to change. But even so, not everyone embraced the idea of adding trees and farming differently. “This is a waste of my time and limited resources!” Explained an old man as he spat on the ground in disgust at one training event. For some farmers, growing trees together with crops to restore land and boost their financial security was ‘business unusual’.

“My neighbours were curious to see if I would succeed,” said Odero. ‘We were all suffering from falling returns from annual crop, and so there was a risk involved. Some wondered if I had made a bad move.” But Odero’s wager paid off. “On average, a pawpaw tree produces 30 to 50 fruits per year. Since I have 500 trees, I harvest between 15,000 and 25,000 fruits per season. Their sale brings in between KSH 1.2 to 2 million (USD 1200–2000, a middle-class income in the area).

Odero benefited from Regreening Africa’s training, but he was also a skilled farmer. “My fruit farming skills are considered top notch, and this is evidenced by the healthy trees on my farm. I am no longer my neighbour’s laughingstock. Instead, I smile my way to the schools where my children study. They have never lacked fees and my family has not once gone hungry. Odero and his family can now look to a better future: “I plan to build a better house, buy more land, and provide other luxuries for my family. In years past, we could only do such luxuries at Christmas – that is, if we had a good year!”

For Charles Odhiambo, the proof of concept has been transformative. “Pawpaw has proved to be very marketable, with farmers like Mr. Odero making fortunes, turning from a life of struggle to that of plenty in a span of less than three years,” he observed admiringly. “I encourage other farmers to emulate Mr. Odero, for the future is in fruit-tree farming. The market is enormous, yet the supply is limited.”

Mr. Odero’s success is having an impact on his neighbours, too. Even those most sceptical and dismissive have become curious and engaged. And that is by design, not a lucky coincidence.

To ensure the knowledge and skills Regreening Africa shares with farmers is spread as widely as possible, every lead farmer like Charles Odero establishes an orchard on his/her farm and use these as places for community training. They commit to train at least 10 other farmers and to follow up on these farmers’ adoptions of newly acquired practices and trees. The lead farmers also help them choose the most easily marketed varieties (red royale papayas, for example, are in demand in urban areas to make puddings and other desserts).

Odero has so far trained 20 farmers. His trainees come from a variety of backgrounds, including retired teachers, gold miners or mono-croppers. Most find that the increased adoption of precious fruit varieties that provide yields in short cycles help them boost their income enough so they can afford to abandon activities like mining that have worsened local land degradation. Five have already established pawpaw orchards averaging 80 to 100 trees each. They plan to form a cooperative to improve individual marketing capacities. “I started off with 88 pawpaw seedlings in 2018 and I currently have 102 trees, said Martin Okello, a beneficiary of Odero’s training. “Unlike grafted mangoes, which take three years to mature, pawpaws mature in a span of two years. To ensure I’m not the only one benefiting from the knowledge I have acquired, I reached out to 21 farmers, including a youth and five lady farmers, who are planning to do the same.” 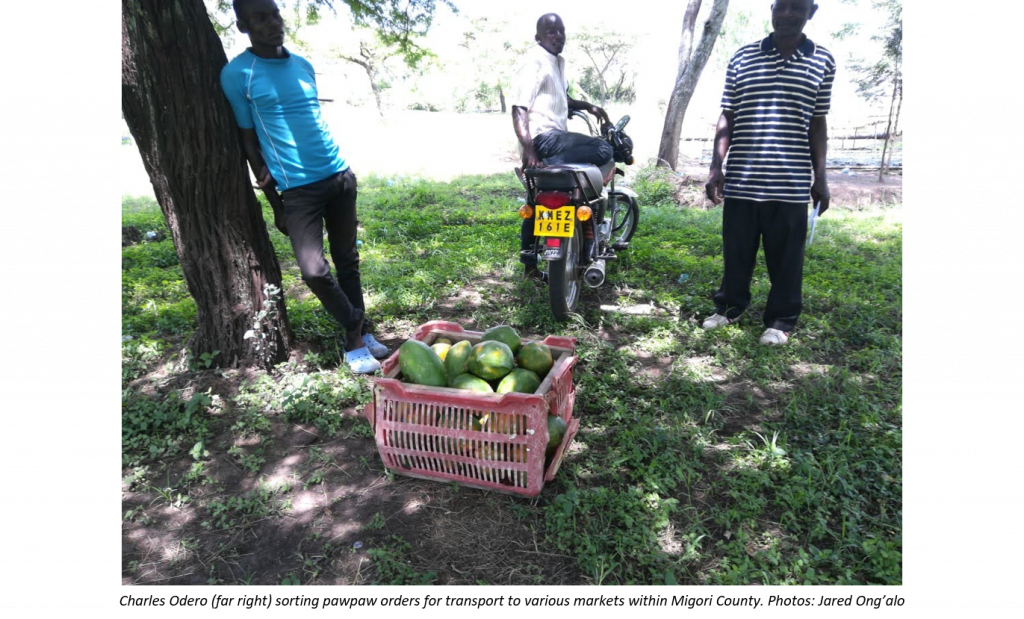 But why pawpaw, you may ask? There are dozens, perhaps even hundreds of fruits that could thrive in Migori. The key reason is that pawpaw is a tree people are familiar with and that has multiple uses. The fruit has traditionally been used to cure diseases related to vitamin A deficiency, while the leaves makes magira, a delicious and very nutritious vegetable dish. The seeds are used for medicinal purposes and the pulp to brew a beer. The fruit is easily marketed for fruit salad, with the juice market a promising one farmers can tap in the future. “A single fruit retails for KSH 40 (USD 0,4),” Milka Akoth, a member of the Ndemra Support Group, said. And that was a welcome source of funding for further investment: “I used the money from those sales to buy guinea fowls from which I sell the eggs; one for KSH 50 and a tray at KSH 1500”.

Mrs. Akoth astutely observed that further investment for value addition and marketing would be welcome: she was worried about overproduction. “In a year’s time there will be a lot of papaws and we’ll need to add value.” She pointed out that if women had access to processing facilities to produce crisps, powder and juices, they could diversify their income and reduce their dependence on the fresh fruit market, whose spot prices of course drop at the time most pawpaws hit the market.

Beyond the immediate benefits for farmers, pawpaw trees control soil erosion, conserve soil moisture through shading and mulching , improve soil fertility – and add some beauty to peoples’ lives (Alphine Okello, Martin Okello’s daughter, remarked that the beauty the trees had brought to their home and environment was a major benefit for her).

Farmers will have access to more seedlings courtesy of nurseries established with the support of World Agroforestry (ICRAF) and the Kenya Forestry Research Institute. Plans are underway to establish more fruit-tree model farms during the 2020 long rainy season since there are adequate community tree nurseries to meet demand.