A tale of an enclosure: an Ethiopian success story 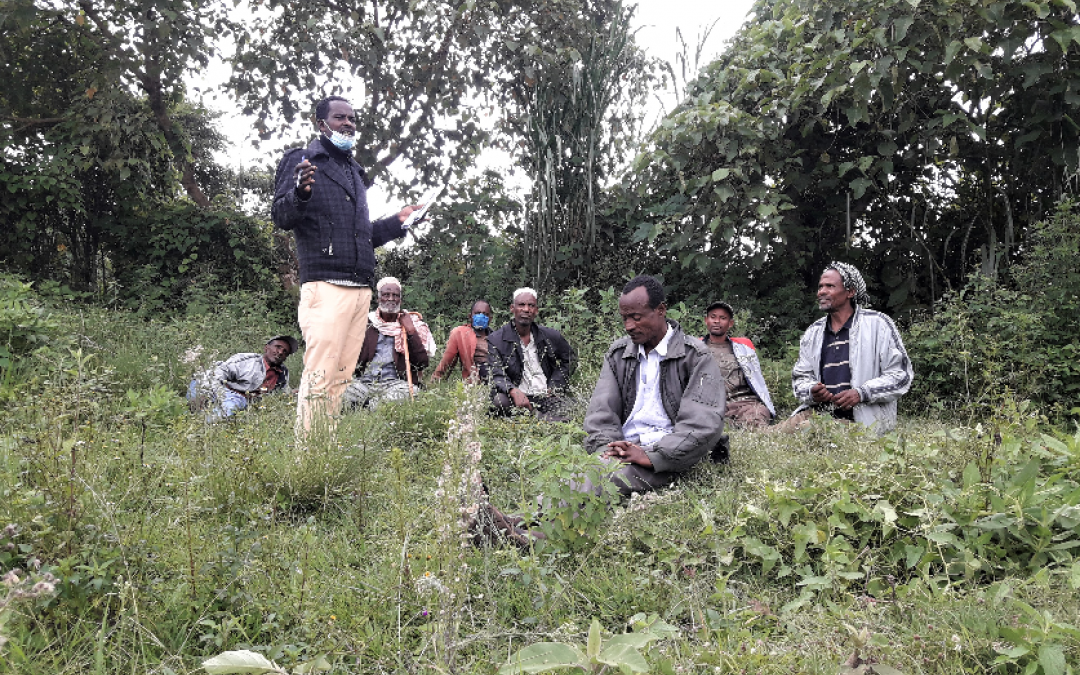 Reluctantly, farmers enclosed a piece of barren land and were surprised to see it soon fill with grasses, shrubs and trees that bring many benefits for the community. 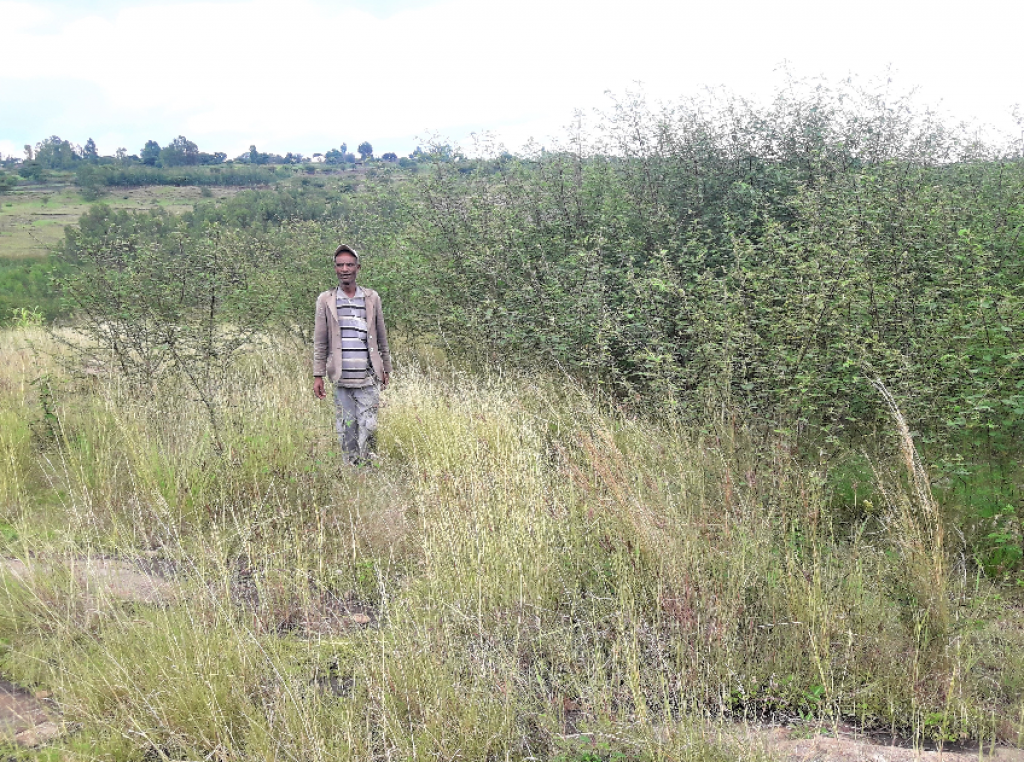 Part of the area enclosed by farmers in Alage that used to have little vegetation. Photo: World Agroforestry/ Eyob Getahun

In 2017, when World Vision Ethiopia, a non-governmental organization, started implementing the Reversing Land Degradation in Africa by Scaling-up Evergreen Agriculture (Regreening Africa) project in collaboration with World Agroforestry (ICRAF) in Ethiopia’s Alage ‘kebele’ (the smallest administrative unit) in Shashogo District of the Southern Nations and Nationalities and Peoples’ Region, the farmers in the area gathered for a community meeting.

At that meeting, among other commitments, they agreed to enclose a stony, overgrazed and eroded piece of land that could not be used for crop production. But even given the condition of the land, that commitment had not come easily.

Temesgen Hailu, a development agent who is also head of the kebele’s agricultural development office, vividly remembers the initial interaction with farmers.

‘When we told them that they will be able to get grass from the barren area where the cattle spend the whole day eating little grass, the farmers said, “That is impossible! It is like eating bread in our dream!” They were even suspicious of the intent. They thought we were giving their land away to a private investor. You see, they got no benefit from another land that had been given to a private investor before as all the benefits and profits from the investment were never shared with them. We told them that this time, the land, and everything that would grow on it, would belong to them. But they were not easily convinced.’

Hailu discussed the farmers’ reaction with World Vision Ethiopia. Together, the development agent and World Vision Ethiopia staff came up with a plan to train the kebele’s leaders, the religious leaders, community elders, and other development agents) in the area on how to successfully restore degraded land, with clear examples — shown in videos — of how other regions of Ethiopia had been transformed.

After the training, the local leaders decided to give it a try. They agreed to enclose the area from unwarranted tree cutting and livestock. 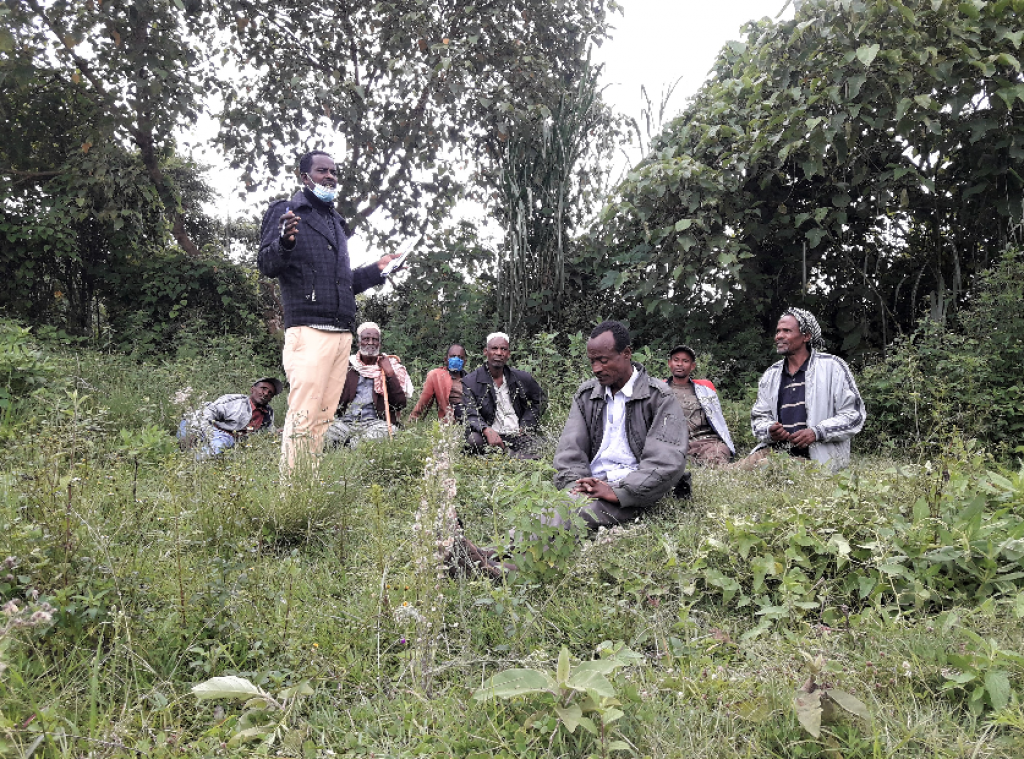 After the training, the next step was going back to the farmers living around the barren land, which covers about seven hectares, to convince them to enclose the area to protect it from destructive human and livestock activities in order to see the results for themselves.

It was not easy to persuade them, even though they received very little benefit from the barren land. They were not sure if the land could be regreened and, most importantly, they were suspicious of the intentions.

‘Issues related to land are very sensitive,’ said Timotiwos Tufa, Regreening Africa’s project officer in Shashogo. ‘The most difficult work was convincing the people. Some farmers said, “The area is a grazing land for our cattle, it shouldn’t be enclosed.” But others who were aware about the potential and benefits of restoring the area argued, “Once the area is enclosed and the natural vegetation regenerates, we will get wood as well as more grass and fodder for our cattle.”’

There was a heated discussion between the two groups of farmers. One meeting was clearly not going to be enough. The project team organized discussions repeatedly.

‘We did not force them to enclose the land,’ said Tufa. ‘For if we did so, they would destroy what grew from the land. They needed to be convinced. We let them discuss among themselves. And after many meetings and discussions, they were convinced that they will benefit more if they enclose the area.’

Once the farmers were committed, the barren land was enclosed in February 2019. Since then, the farmers have been protecting the area from any destructive activities, such as cutting trees and shrubs and livestock freely grazing.

To many of the farmers’ surprise, within a few months grass and shrubs had begun sprouting from the barren land. A year and half later, when a team visited the area on a Joint Reflection and Learning Mission on 10 August 2020, they were able to see the enclosed land covered with grass, shrubs and trees.

‘No animal gets into the enclosed area,’ Hailu said. ‘The farmers have agreed to a fine of 50 birr [USD 1.35] if a cow or an ox is let into the enclosed area and 25 birr (USD 0.67) if a goat or sheep is found grazing in the area. The farmers will soon begin reaping the benefits of the land. They will soon start cutting and selling grass to other farmers at a reasonable price.’

The farmers have organized themselves into an association and they plan to save the money they receive from the sale of grass in the association’s bank account.

During a meeting with the Mission team, Jemal Erkecho, a farmer, said, ‘Before the area was enclosed, even if the cattle had spent the whole day on the barren land, they still couldn’t get enough grass to graze.’ 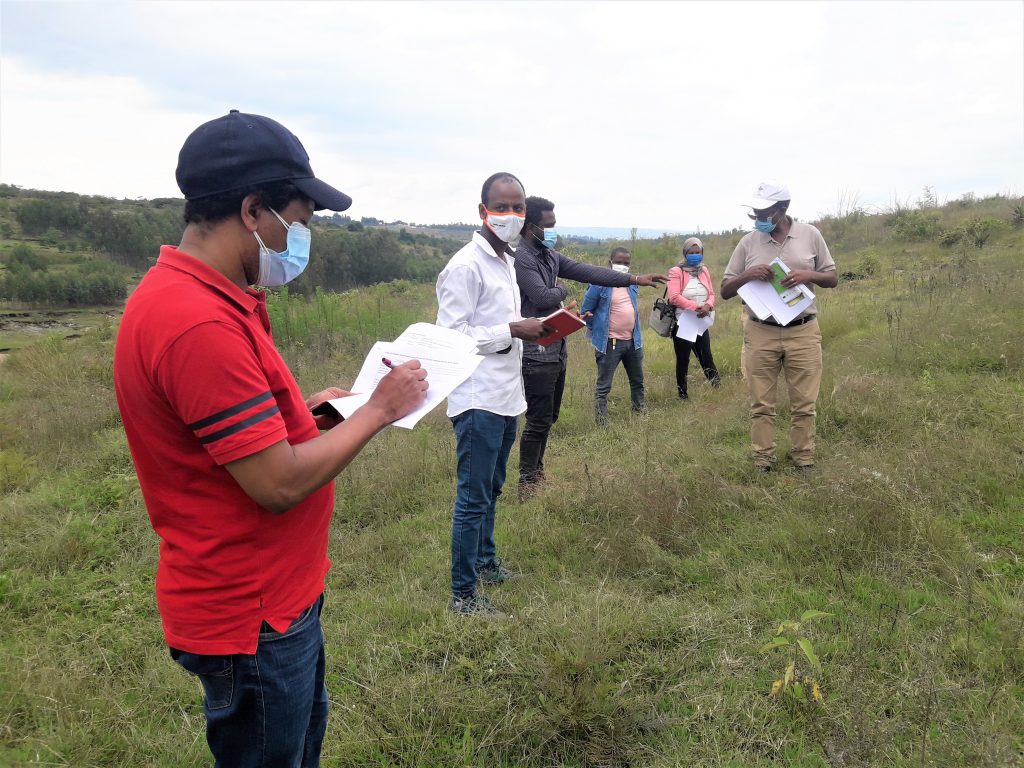 As well as trees and shrubs that have regenerated naturally, more than 17,000 Grevillea robusta trees have been planted in the enclosed area in addition to Acacia saligna, neem (Azadirachta indica) and Cordia africana trees for timber, which is in high demand in most cities in Ethiopia.

‘The farmers living around the enclosure are very much surprised by the visible change they observed,’ said Hailu. ‘They were happy to plant trees in the enclosed area.’

The farmers are planning to plant more than 39,000 trees in the next five years. The kebele receives tree seeds from Regreening Africa and farmers raise seedlings in the kebele’s nursery.

Regreening Africa has also provided avocado, mango and coffee trees to farmers and they have planted them on their own private land to provide fruit for nutritional benefit as well as income.

In addition to supplying seeds to the nursery of trees prioritized by farmers, Regreening Africa is committed to diversifying with indigenous tree species that are good for the environment. But this change also will not come overnight because the farmers prioritize trees that will give them quick returns.

Regreening Africa is also strengthening the kebele’s nursery by building capacity in various restoration techniques and diversification of species.

‘This area closure has become a learning and demonstration site for the district,’ said Tufa. ‘Now we don’t need to go to other districts for experience sharing. It has become a successful project area. Some indigenous trees and shrubs have appeared out of the blue. People were generally amazed.’

Encouraged by the achievement they witnessed, the farmers in Alage have gone on to enclose an area adjacent to the previously enclosed area.