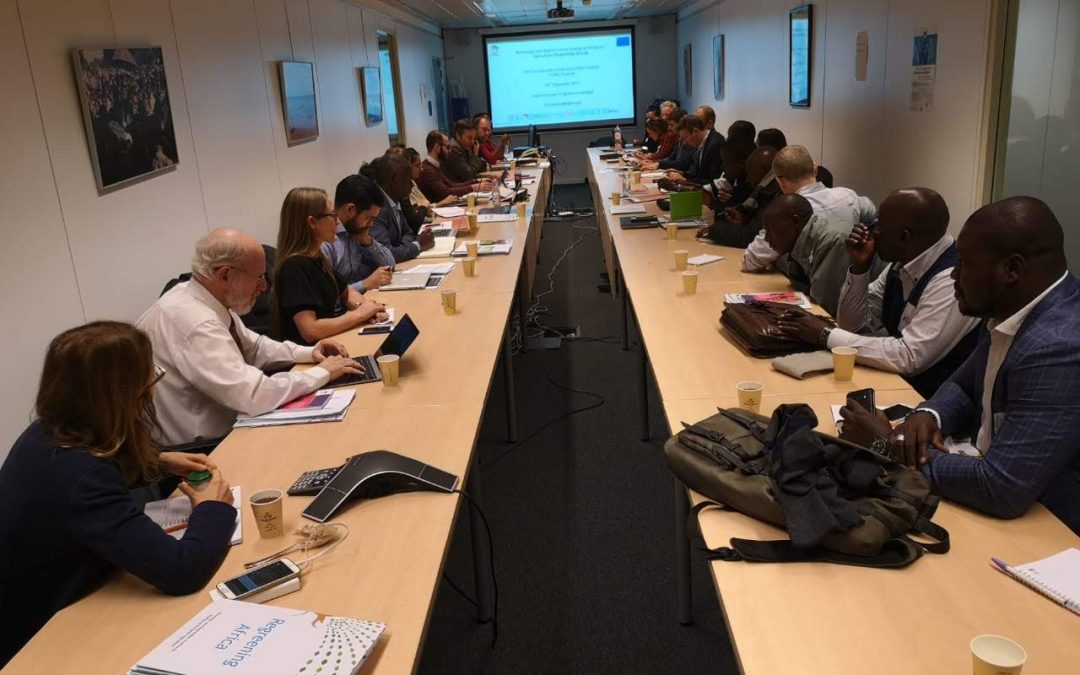 The last quarter of the year 2019 was a time to fine-tune scientific and implementation strands, and perfect the agenda of restoring degraded ecosystems across the eight countries where the Regreening Africa project is ongoing. Committed to restoring one million hectares and improving the resilience of 500,000 households across sub-Saharan Africa, it was time to pause and check the project’s pulse rate.

There were some nail-biting moments among attendees during the 3rd Steering Committee meeting as the verdict on whether or not the initiative was moving in the right direction was going to be presented in 48 hours. It was held at the European Commission’s conference room in Brussels, Belgium. Let’s take a brief trip down memory lane…

It all started with the realization that there was a missing middle between global commitments and local action on land restoration, during the Beating Famine Conference in February 2019. Business as usual, where research and development normally took different paths, was not yielding the desired results. Conference participants therefore began asking the question: what was the step in the right direction?

The solution could be to combine research with development, hence making evidence-based decisions for the varied socio-economic and biophysical landscapes of eight countries. But then again, what does this entail?

We are talking about multiple conversations with numerous actors, which in most cases, took place in different languages and dialects that were unique to each country. This ensured that the chosen options took into consideration the unique context within which agroforestry interventions could be implemented. In the field, spaces were created where farmers could propose local innovations that have worked for them over the years; after all, daily interaction with a challenging environment had forced them to be creative to ensure survival.

Incorporating scientific knowledge into their systems could enhance the restoration approaches that were being promoted. For example, in Niger and Rwanda, other restoration practices beyond FMNR, such as zaï pits and terraces, were added to the menu to enhance restoration impacts. The combination of such local experiences with scientific knowledge generated a recipe for sustainability and created a win-win situation for the project and its beneficiaries.

Behind desks and in sophisticated labs, scientists scrutinized data from way back and linked the findings to today’s context. What could have caused the sorry state of desertification and degraded landscapes? Are there ways to overcome it? And if farmers have already been disappointed in the past with theories that were sold to them, why should they believe us now? Which incentives could be put in place to encourage farmers to switch to more sustainable farming practices such as agroforestry and FMNR?

These and other difficult questions triggered light bulb moments during which scientists, in collaboration with development NGOs and farmers, first identified hotspots of land degradation, then designed effective interventions to restore soil health, and tackle longstanding challenges of agricultural productivity and human nutrition, while countering the effects of climate change.

These were further reinforced through several workshops and training sessions on land degradation surveillance framework, value chain, grafting, tree nursery establishment and maintenance. Furthermore, the Regreening Africa App, a mobile-based application that helps the project with real-time monitoring of households and hectares reached through tree planting and FMNR, tree nurseries established, and training sessions conducted, was developed, translated into French and launched across the eight countries. We are super enthusiastic to see the data that will be coming from the field!

There is definitely a spring to the steps that were initially draggy as commitments are being made at community level. With leadership from village elders, Imams and/or priests, by-laws in place propose hefty fines for those who cut down trees or allow their livestock to graze freely. How effective will these by-laws be? We are keen to witness their impact on land restoration.

Within the project, links with stakeholders from different organizations have also been strengthened, coalitions established, and weaknesses and strengths of existing policies identified. Countries that have made progress on agroforestry policies and strategies include Rwanda, Ethiopia and Kenya. But did you know that Ghana has had an Agroforestry Strategy in place since 1986? As social and governance experts, led by the World Agroforestry (ICRAF), look at these policies through the research component, it will be interesting to see what impacts these have had on adoption of agroforestry.

At the United Nations Convention to Combat Desertification (UNCCD) Conference of Parties (COP) 14 held in November 2019 in New Delhi, India, Economics of Land Degradation (ELD) and ICRAF scientists came together to organize a successful side event dubbed Halting Land Degradation by Scaling Up Proven and Cost Effective Land Management Practices. The project was also at the forefront at the Global Landscapes Forum event in New York in September 2019, during the UN General Assembly, at a session dubbed, Resetting the Restoration Agenda. Other outreach sessions took place at the World Congress on Agroforestry in Montpellier, France, Global Soils Week in Nairobi, Kenya, Global Landscapes Forum in Accra, Ghana, and the International Tree Fair in Burkina Faso.

The Economics of Land Degradation, which spearhead the projects’ first component on strengthening the capacities of national governments and other partners to assess the costs and economic benefits of investments in sustainable land management, recently launched a campus meant to serve as a free knowledge platform for teachers and students, as well as a summer school, to create stronger restoration foundations for the future generations.

So, is the project on the right track? The Steering Committee, recognizing the tremendous efforts and significant accomplishments made in Year 2, as well as the synergies created among partners, seems to think so! The European Commission expressed their appreciation to the entire team, and special recognition, with awards, to Rwanda and Niger teams for their outstanding performance in implementing regreening activities.

Looking ahead, the European Green Deal coupled with the UN Decade of Ecosystem Restoration, and the ongoing Decade of Family Farming, just to name a few, will provide platforms for the project to springboard the great achievements in land restoration in the year 2020. You may need your sunglasses, as the future is promising to be bright and hopeful!