Teaching children the importance of trees to better protect their environment 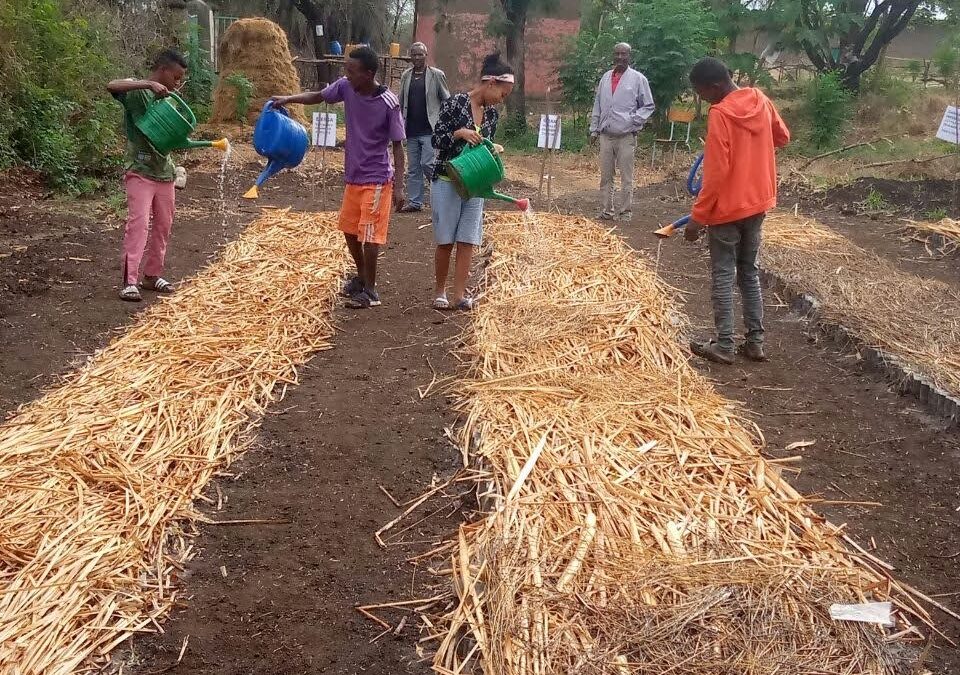 Building younger generations’ climate and restoration awareness and adaptation skills is critical for facing the challenges ahead wisely and safely.

Soke Bokucha School is in Soke Bokucha Kebele, Jeju Woreda in Oromia, an area characterized by very hot weather accompanied by erratic rainfall. The remaining community forests are under pressure owing to high demand for firewood, charcoal and construction wood for housing and fencing. Overharvesting in the Soke Bokucha landscape is having a negative impact on communities living here. Strong winds blow off roofs of houses and schools, shade for people and livestock is disappearing and women and children now walk a long distance under the hot sun to collect firewood. This results in poor school performance of the children.

In 2020, the Regreening Africa project organized environmental education activities targeting different schools with the aim of helping them ‘go green and enjoy a clean environment’.  Soke Bokucha was one of the schools that gained from the training events that covered how to start a tree nursery at home and at school. Topics included preparation of seed beds and seedling pots, soil mixes, nursery containers, seedling care (including watering), pest and disease control through nursery hygiene and species’ diversification.

‘The training helped the students understand how actions such as felling trees and vegetation clearing affects the environment and accelerates biodiversity loss as the remains are exposed to harsh weather conditions,’ explained Adem Gena, the Regreening Club patron. ‘It helped build knowledge of the importance of restoring degraded land and encouraging them to adapt simple practices, such as tree planting.’

After the training, the school received a total of 25 kg of assorted seeds, comprised of  5 kilograms of  Olea africana (Olive/ Awhlie), 10 kilograms of Cordia africana (Wanza) and Melia azedarach (Limo), all of which are suitable for local weather conditions. The school nursery was supported with donations of hand tools, like rakes, spades, wheelbarrows, water tanks, watering cans and hosepipes.

Through the skills gained from the training, the Regreening Club has embarked on creating awareness of growing trees to help regreen their school and surroundings. The club is creating awareness among fellow learners and the community through sports tournaments, poems and drama. Peer-to peer-education as well as educating their parents at home is an activity that they do routinely as club members. Currently, they help in mobilizing the school community and the community at large to create awareness of the importance of trees and climate change.

In March 2020, the Regreening Club started a ‘green revolution journey’, targeting to raise 15,000 multi-purpose tree seedlings — such as Olea africana, Cordia africana, Melia azedarach — and another 13,500 seedlings for various specific purposes. This year, the club raised enough seedlings to share with community members, plant some in the school and even some for sale. In future, the club is hoping to connect with a private company engaged in fruit production to sell them seedlings meant for windbreaks to shelter the orchards in the area. The money raised from the sale of the seedlings will be used to purchase school material for club members.

‘Everyone in the school is a member of the environmental club and our vision is to reach all farmers in this area with awareness of tree growing by establishing large nursery sites,’ said Gena.

The Regreening Africa project is funded by the European Union and has been implemented since 2017. The goal is to improve livelihoods, strengthen food security and build resilience to climate change while restoring degraded ecosystems in eight countries. In Ethiopia, the programme is implemented in 25 woredas (districts) across four regional states of Tigray, Oromia, Southern Nations Nationalities and Peoples’ Region and Amhara. During the past 2 years, the Regreening Africa’s interventions have reached 93, 456 households, resulting in the restoration of 105,925 hectares of degraded land. Regreening Africa is implemented in partnership between World Agroforestry (ICRAF), World Vision and Catholic Relief Services.