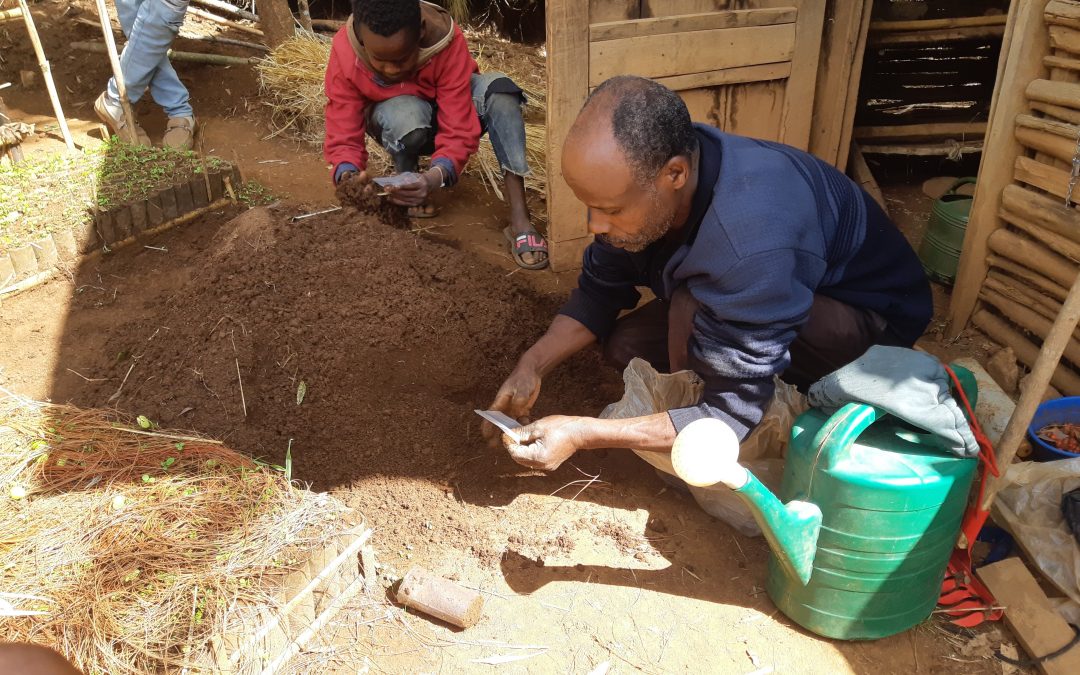 This story of a successful breeder of tree seedlings is inspirational, demonstrating the power generated by capacity to drive change for the better.

Every day, Shura goes out to save the world in his own way. He supports local farmers voluntarily on how to produce their own seedlings on their farms.

The Government uses him as a role model in his community. His 0.6 hectare of land is evidence of his work.

Ato Shura Bore, 55 years-old, is regarded as one of the best farmers practising regreening activities in his village in Gase Kebele, Hula Woreda. Together with his wife and children, they enhance production and productivity and sustain ecosystem services in their area through agroforestry.

Shura was never considered the best farmer. Owing to land shortages, he was hardly able to feed his family through crop production on his limited plot of land. Tired of not having enough yields from his farm, he decided to raise eucalyptus seedlings because they were in high demand and the seeds were readily available locally. The trees would also increase vegetation cover in his neighbourhood and improve carbon sequestration.

When the Regreening Africa project began its work in Hula Woreda in 2018, Shura was producing 2000 eucalyptus seedlings and earning ETB 1000 (USD 23) from total sales. With the knowledge he already had about producing tree seedlings, he was selected as one of the volunteers to receive training in management of tree seedlings and on-the-job training with practical demonstrations.

After the training, he also received tree seeds, such as Grevillea robusta and Pinus patula, which are in high demanded by the community for boundary demarcation, windbreaks, woodlots and timber. He also received tools, such as a watering can, spade, shovel, pruning shears and wheelbarrow to enable him to propagate more quality seedlings.

Currently, Ato Shura is producing 10,000 Pinus patula, 2000 Hagenia abyssinica (‘hucha’), 500 Grevillea robusta (‘gravilliea’) and 100 apple seedlings in his own nursery. He has already planted 310 seedlings of gravilliea, hucha and apple on his own farm.

The income Shura gets from the sale of seedlings has enhanced his family’s food security and enables him to provide other basic needs, such as education and good health care.

Happily, Ato Shura declares, ‘From now on, I will make this small, sloping plot of land a learning centre for farming diversification, land restoration through farmer-managed natural regeneration and agroforestry practices and sources of income by using the skills and knowledge I have gained from Regreening Africa.’