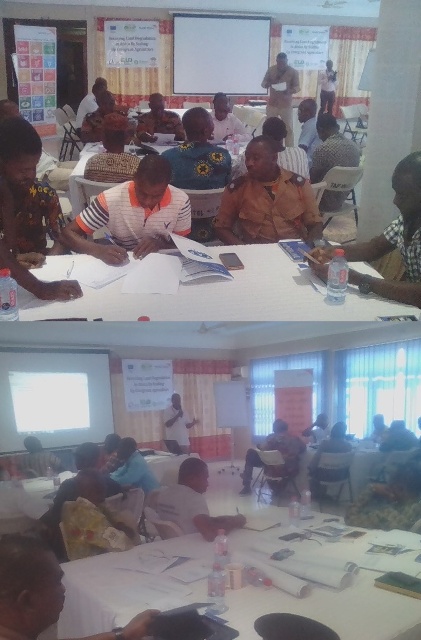 A new Food Security and Climate Change Project, dubbed, “Scaling-up Evergreen Agriculture Project” is to kick start in the Bawku West, Garu and Mion Districts of the Upper East and the Northern Regions respectively.

Speaking at a stakeholders meeting held in Bolgatanga to make inputs and review the project, Madam Phyllis Muthoni, the Resource Development Manager of World Vision Ghana (WVG), said the four-year project when successfully implemented would translate into about 62,500 households per country through the restoration of essential ecosystem services such as soil fertility, erosion control, and water cycle buffering on one million hectares of land.

She said WVG, the Catholic Relief Services (CRS), OXFARM, Economics of Land Degradation–ELD (a project of GIZ), World Agroforestry Centre, and the Mion, Bawku West, and Garu District assemblies among others would be the implementing partners.

Madam Muthoni said the “Evergreen Agriculture Project” is a form of Agroforestry where trees are incorporated directly into croplands and farm landscapes and stressed that under the concept, the land is kept under vegetative cover throughout the year.

“Evergreen Agriculture also incorporates conservation agriculture practices such as minimum tillage, use of organic compost, mulching among others. Key techniques to be promoted include the “farmer managed natural regeneration and tree planting. All the above indicate the desire to keep our landscapes green, and families healthy, happy, and prosperous”, she explained.

The Resource Development Manager who said the project would target communities and individual farmers including smallholder women farmers as well as Persons With Disabilities (PWDs), added that the new project would promote the development, adoption and spread of locally appropriate forms of evergreen agriculture.

Madam Muthoni said Evergreen agriculture was not a new project and that the Farmer Managed Natural Regeneration, being implemented in the Talensi and other parts of the Upper East Region as well as in Uganda, France, Niger and Burkina Faso were examples of the Evergreen Agriculture.

She mentioned among others key achievements of the FMNR being implemented by WVG in Ghana as 400 hectares of lands under forest cover with average tree density of 2,334 per hectares.

Madam Muthoni said other achievements chalked by WVG FMNR include a 600 hectare farmland covered under FMNR management being the average tree density of 57 per hectares as well as 6,288 Acacia trees planted by farmers along farm borders all under the FMNR.

Besides, she said, there are about 1.5 hectares Acacia provenance trial with 1,000 acacia trees.

“Also Faidherbia and other indigenous trees established by the WVG FMNR project also recorded Zero bush fires over 5 years in 90 per cent of FMNR communities in the regions”, she said.

“It would also be implemented by developing and strengthening agroforestry value chains, expanding the activities that support further refinement of practices among others”, he said.

Mr Rexford Bugre Yamdorg, the Upper East Region Based Operations Manager  of  WVG,  who is also the Cluster  Progamme Manager of WVG for the Bawku areas, explained that the purposes  of the stakeholders meeting was to discuss the theories of change for both direct scaling  up of the project and for influencing wider policy, practice, and investment decisions as well as Monitoring, Evaluation and Learning (MEL) Plan, Gender, Youth, and Inclusion Integration   and the Discussion of Country Activity Plan.

He urged the stakeholders including the Staff of the Ministry of Food and Agriculture, the Savanna Agricultural Research Institute (SARI), the Savannah Accelerated Development Authority, Farmer Based Organizations, the Environmental Protection Agency, Civil Society Organizations, the Ghana Fire Service, the media among other agencies to help ensure that the project achieved its aims to accelerate the attainment of the Sustainable Developments Goals.