Diversifying to enhance conservation and food security in Ghana 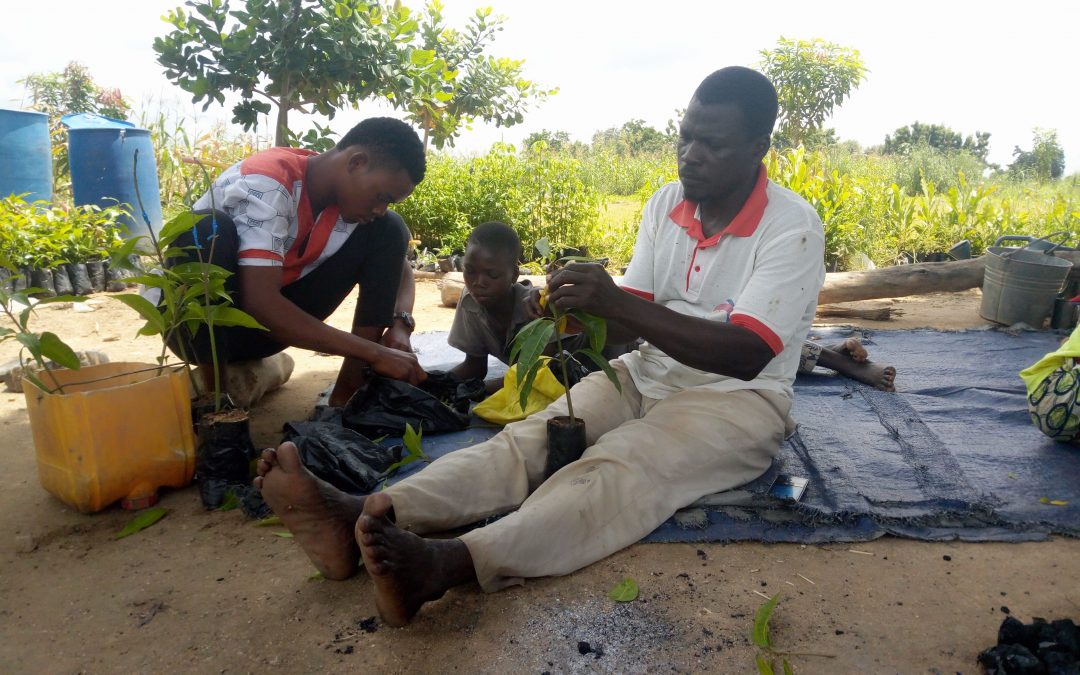 Farmers are benefiting from training in various sustainable agricultural and agroforestry practices by World Vision Ghana.

Sheik Ahmed Bashiru, 52, saw a business opportunity in the production of tree seedlings and decided to pursue it.

A trader for several years, Bashiru, who is from the Woriyanga Community in Garu District in the Upper East Region of Ghana, sold sheep and goats to support his family of nine children.

Following information sessions with the community on sustainable land management for improved food security, Bashiru joined training on good nursery practices and management, grafting and conservation agriculture that was organized by World Vision Ghana in 2018. He was one of 20 people in his community who received the training.

The Regreening Africa project, which is led in the country by World Vision Ghana, works with communities to encourage adoption of sustainable land management for improved food security and biodiversity conservation to sustain rural livelihoods and ecosystems.

As a result of the training, Bashiru partitioned one hectare of the family’s farmland to produce seedlings commercially. He began with seedlings that he purchased from seed producers and others that he obtained locally in the community. The seedlings included mahogany (Swietenia spp), kapok (Ceiba pentandra var guineensis), cashew (Anacardium occidentale), mango (Mangifera indica), teak (Tectona grandis) and acacia (Acacia spp). He also grew over 4000 improved mango seedlings in 2021.

During the planting season, Bashiru sells 5000–10,000 seedlings at the local market and directly to farmers who come to his farm. World Vision Ghana also purchases fruit seedlings from him, particularly mango, to distribute to communities in the Bawku West and Garu-Tempane districts. This earned him GHC 9465 (≈ USD 1600) from World Vision and other local buyers who purchased his seedlings during the final production season, which ran from May to September 2021.

Bashiru has also begun grafting seedlings, a technique he learned from the training. Vegetative propagation, such as tree grafting, are used to improve the quality of the fruit. Grafted trees also take a shorter time to start flowering and produce fruits. Farmers can then reap greater benefits in a shorter period. ‘When I graft a mango, I sell it for GHC 10 (≈ USD 1.60) and it matures in two years’ time, unlike the non-grafted mangoes, which mature in 3–4 years and sell for half the price of the grafted mangoes.’

During the rainy season when seedlings are transplanted, he sells at least 10 seedlings a day.

To diversify his income and enhance his household’s food security, Bashiru began cultivating onions on his farm because they mature fast and sell quickly. He is now reaping big benefits thanks to the conservation agricultural practices that he learned, such as composting. He harvested 39 bags of onions in 2021, which he sold for GHC 15,600 (≈ USD 2476). Regreening Africa is led by World Agroforestry (ICRAF) and implemented in Ghana through World Vision and Catholic Relief Services, is funded by the European Union. The project is in its fifth year of implementation in the Upper East Region (Bawku West and Garu Tempane districts) and the Northern Region (Mion District), where a total of 80,000 hectares are targeted for regreening, benefiting 40,000 households, with the aim of improving their livelihoods, food security and resilience to climate change by restoring ecosystem services, particularly, through agroforestry.

* Joshua Adombire is a project officer with World Vision Ghana